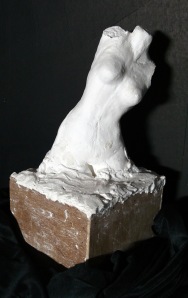 A plate we made for Three-Dimensional Art Class back in college.

First we made the shape in regular clay. Then we made a negative mold using plaster. The final product is also made in plaster.

The time that I passed this to get checked by the professor, the body still have some bits of arms. . . However, in my journey back home, the arms broke off. 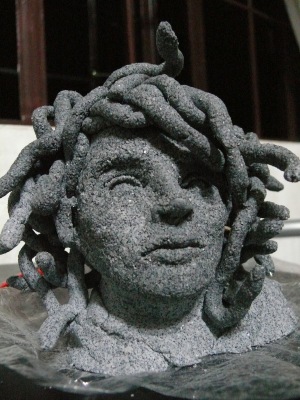 One day, I was job-hunting.
There was a job ad looking for “graphic artists/clay modelers”
I thought about the “/”. I thought it meant they’re looking for someone who can do both.

I figured if I’d get called for an interview, I better bring a sample work, so I bought a weird kind of clay (only weird because it was very new to me), a “Stone Clay”. I was looking for some hardening clay. I saw three kinds of it at the store I went to:
–a wood clay ———it’s probably hard to make details with this one because it’s kinda chunky
–a pottery clay——–if this one’s the same as the one I used back in college, the water-based one, it’ll tend to crack.
–a stone clay———so I chose this one. This one takes 24 hours to harden and it doesn’t crack -at least that’s what the label said.

And then I thought I’d make Medusa’s head just because it’s challenging.

for the nose: pinch the middle part of the face then use a pointed material to punch in the nostrils.
for the eyes: I sank my fingers to make the eye socket. Then I made little eyeballs and placed it carefully inside the socket. For the upper eyelids, I flattened a small semicircle shape clay and then carefully placed it in the socket. For the lower lids, I took the same shape of clay and then placed it over the eye socket and then blended the bottom part on the rest of the face .
the mouth: I sank my finger to make a hole in the mouth. Took a strip of flat clay for the teeth (see above) because I thought her mouth would be open. Haha, I changed it later. Then I made the lips from separate pieces (the upper and the lower lip) of rolled clay.

At first I thought I could make the hair without any wire support. I was wrong. The clay tends to get brittle, it breaks easily and it can drop from its weight. I used some aluminum wires as support.

Lesson learned:
The stone clay is better off used to make simple things like beads. It’s not really good for making detailed sculpture because of its really rough texture and noticeable grains. However, if you like that rough effect, I would advise you to use a huge chunk of clay, the bigger, the better. And then a lot of wires or any other things that can serve as a skeleton or support.

There was an error retrieving images from Instagram. An attempt will be remade in a few minutes.